The Maine Coon is one of the best-known domestic cat breeds in New England and most of the United States. These charming tufts of hair are the most hardy, and tallest, of all breeds of domestic cats raised in homes in the Western world. In addition to their beautiful appearance and sweet personality, their story is also quite mysterious!

2- Origin of the Maine Coon

Their origins are more popular tales and theories than proven real facts. Some might even say that these are the myths of the Maine Coon.

The Maine Coon, one of the native cat breeds native to the United States, is known to have adapted to the harsh winters and wild natural environment of the state of Maine. The cold and distances between populations in Maine have helped the Maine Coon not to mix for hundreds of years. 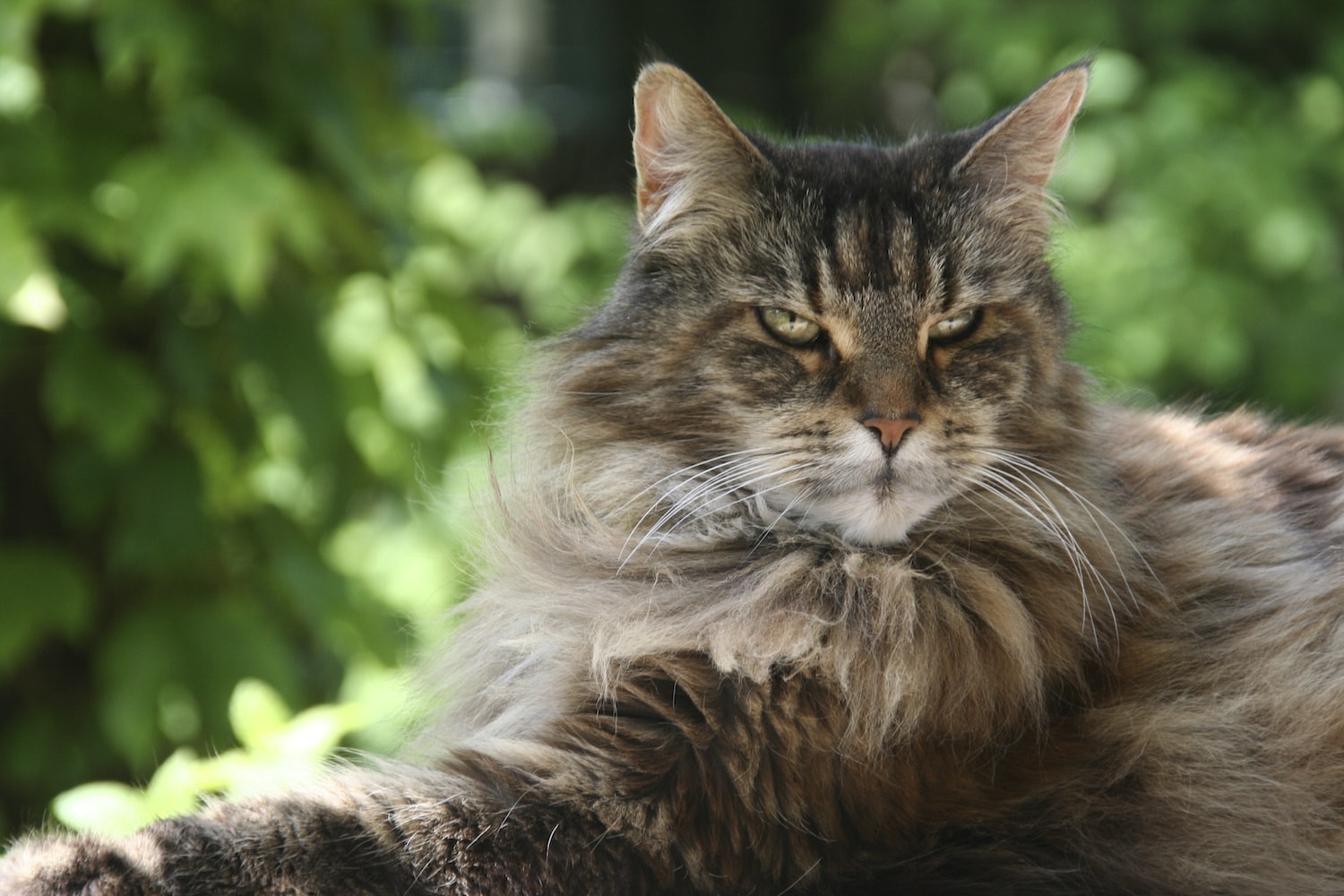 This is mainly due to the small number of other cats in the area and evidence of Darwin's theory on the survival of the fittest. Unfortunately, we don't know much about how they got there.

There are some theories, some more fanciful than others. Others look more like science fiction because of genetic improbability. Yet none of the theories have been proven and their mysterious origins have become part of the strange feline charm of the Maine Coon.

Here are some of the well-known theories about the origins of the Maine Coon. It is up to you to choose the story you want to tell about your cat. 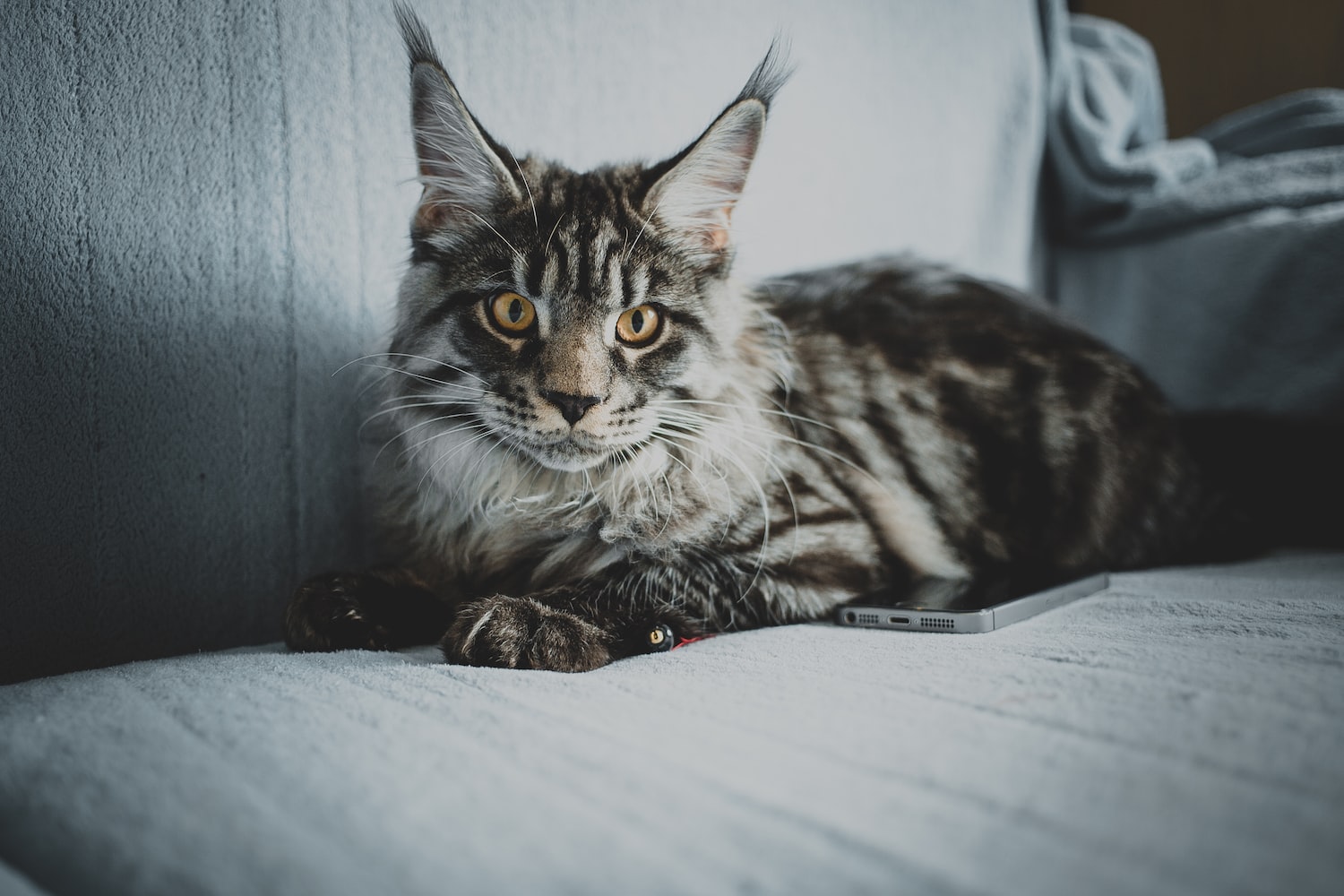 3- The different theories on Maine Coon

From the first theory (cat+raccoons), there are few possibilities. Cats and raccoons are completely different species and cannot reproduce with each other. 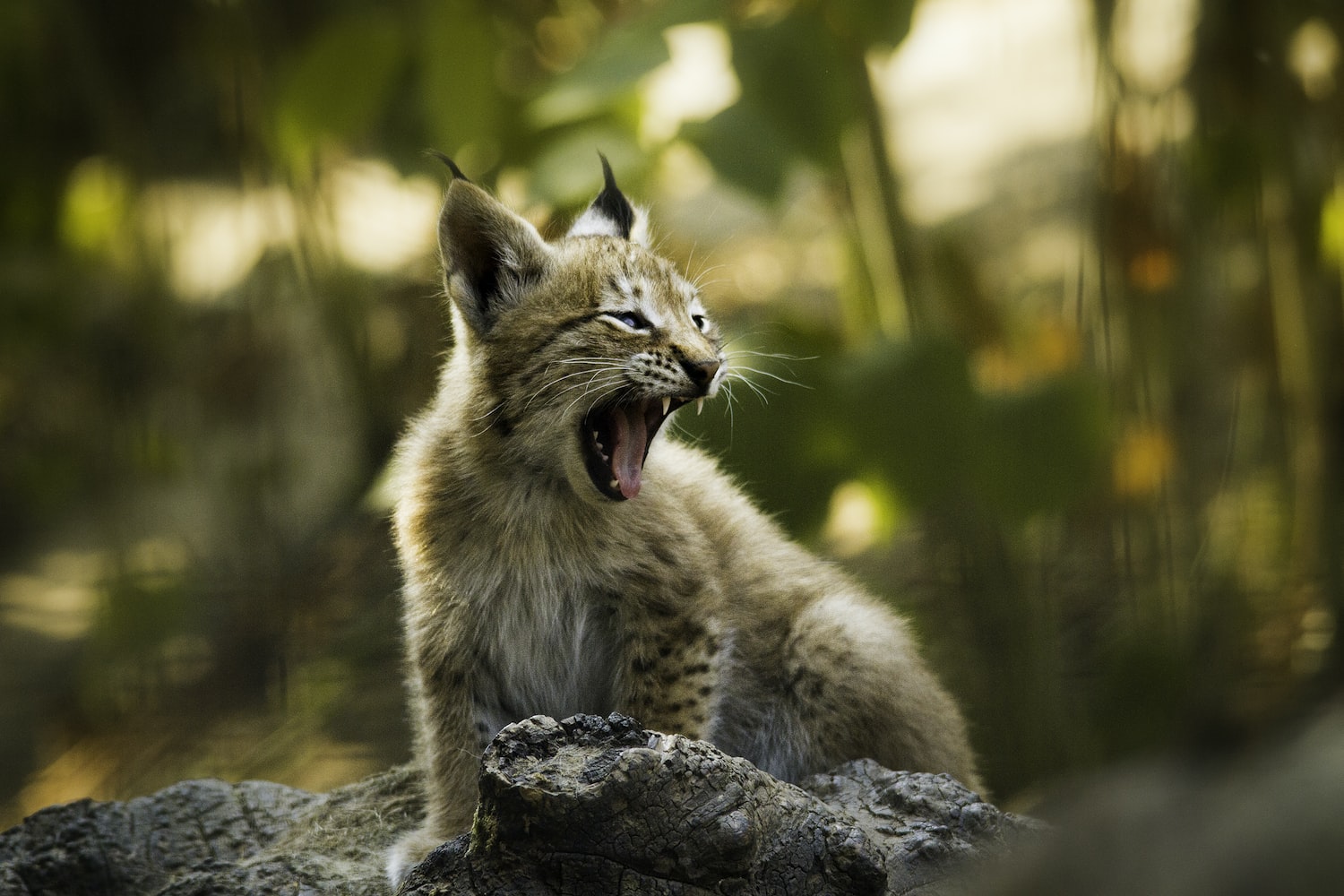 The second theory is the crossing of a Maine Coon female with a bobcat, which may seem more likely but is not. Cats and bobcats both belong to the family Felidae but are not of the same species. The bobcat is of the Lynx breed, which means it cannot breed with normal cats.

Even if hybrid theory is genetically and scientifically impossible, when it comes to appearance and personality, things can get confusing.

The cat + raccoon theory also has some influence in the name of the Maine Coon. Before it was called the Maine Coon, it was simply called the "Maine Cat". The addition of the second word, Coon, could come from the abbreviation for raccoon, Coon, or, as we will see later, from Captain Charles Coon.

This improbable theory has existed for hundreds of years but has no proof.

The strongest theory about the origin of the Maine Coon is that they are the descendants of European sea cats.

Ship captains usually kept cats on board to keep mice and rats under control. This could wreak havoc on the cargo and the internal functioning of the ship. Some captains were so close to their long-haired cats that the kittens were very well cared for and maintained. Some families of sailors closely monitored their cat families, generally keeping the coloured strain for generations. Two hundred years ago, the State of Maine was a common port for ships that dropped anchor and got repaired, and for sailors who took a break ashore. In addition, Maine was also very popular with shipbuilding companies. Many sailor families have settled in Maine's coastal cities, bringing their precious cats. Some captains have also retired to the region, taking with them their beloved feline families. These cats were perhaps one of the few European long-haired cats. The long-haired Angora breeds are the most mentioned in relation to this theory. It is believed that these sea cats would then become the beloved Maine Coon.

Among the theories of ship cataclysms, one particular story seems to stand out from the others. In the 1800s, there was a ship captain named Charles Coon. Even if its name corresponds very well to the story of the cat Maine Coon, there is no evidence that it is not just another popular tale. The story of Captain Charles Coon and his long-haired cats could be the story of any captain, but this one is memorable. When Captain Charles Coon came to anchor in ports along the New England coast, including Maine, his cats also came ashore. As the story goes, they mated with local feral cats. When long-haired kittens began to appear in litters all over the coast, they were called Coon's Cats because they looked a lot like the captain's own cats.

Is the captain's name a coincidence or did he really give his name to the cat breed? No one is entirely sure.

Some Maine Coon theorists believe that these fur creatures are descendants of Norwegian forest cats. They could have gone to the United States on Scandinavian ships for mouse control. Northern explorers arrived in the United States long before other Europeans, and if this theory were true, the Maine Coons would be a much older native species. Although all the theories of ship cats seem highly probable, there is no concrete evidence of their existence and the stories have become more popular tales than stories of "real origin". It really depends on where you are in New England. Each city will have its own story about the origin of the Maine Coon cat, most likely a version of one of the ones we mention here.

The most surprising and interesting of all the myths about the origin of the Maine Coon cat is the one about guillotines, big wigs and a little cake.

At the time of French royalty and Marie-Antoinette's extravagant tenure in Versailles, Turkish and Persian angora cats were a common domestic animal. Sometimes they were even considered invaders because of the speed with which they reproduced and seized homes. King Louis XVI reportedly used cats as hunting targets to have fun with his friends. The story that links Angora cats to Maine Coon cats is the story of Marie Antoinette's near escape to the United States. When Marie-Antoinette and her family were arrested in Versailles in 1793, her captain Samuel Clough and some of his supporters prepared an escape to the State of Maine.

At the docks, there was an anchored ship that regularly travelled the trade route between France and Maine. The plan was to get the family on the boat and take them to Maine safely.

While Marie-Antoinette and her family were incarcerated, the ship's captain and sailors loaded the ship with royal furniture, royal wallpaper, the most fanciful clothing and, according to theorists, most likely an Angora cat family. All rescue attempts failed, leading to the beheading of Louis XVI and then Marie-Antoinette.

When the royal family was executed and disbanded, the ship commanded by Samuel Clough left France in a hurry and sailed to its intended destination in Maine. There, in the coastal city of Wiscasset, the captain's wife was waiting with a large house ready for her royal guests.

The immense manor house was furnished with all the royal possessions of Marie-Antoinette and opulent decorations. This house is still standing and is known as "Maison Marie-Antoinette". It was once a museum, but it is not a private residence and cannot be visited.

This story of the near-survival of Marie-Antoinette and her family is a proven fact, but what remains a mystery is the presence of Angora cats on Samuel Clough's ship. If the Maine Coons are the descendants of Marie-Antoinette's royal Angora cats, it would be a beautiful story, but there is no real documented evidence, only speculation.

A large part of the history of the Maine Coon is the polydactyly genetic character. A polydactyl cat is a cat that has more toes than the regular amount on any of its legs. It's a trait that goes back to the first known Maine Coons. This character is also hereditary. Most polydactyl Maine Coon cats will have polydactyl kittens and this can last for generations. Polydactyl legs are not a problem for cats and are fully functional. Historians believe that this is a trait inherited from ship cats who needed more balance and grip than terrestrial cats. This theory goes hand in hand with the theory of the origin of the Maine Coons, descendants of sea cats.

If you own a Maine Coon, you should now know that your cat is very special. The history and origins of the Maine Coons are so mysterious and speculative that it makes them all the more intriguing. With their lynx-shaped ears, wide legs and ringed tails, these gentle giants can be the kings of your home. Their wild origins and weight require a solid cat tree 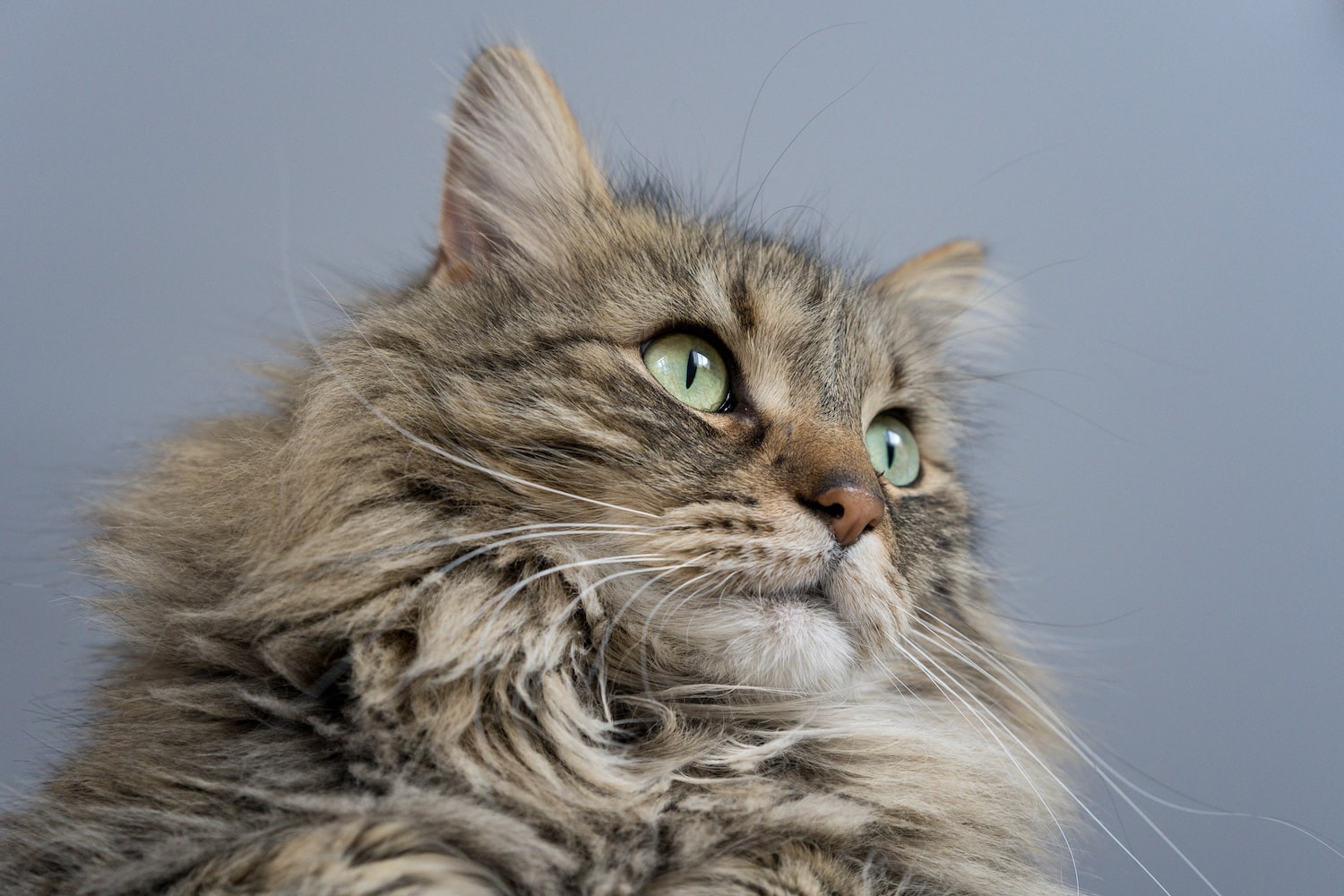 When someone admires your Maine Coon, tell them one of the unlikely stories of its origin. Start with the Scandinavian Vikings and Norwegian forest cats, then end with Marie Antoinette and her royal Angora cats.

the Maine Coon cats, these tall cats, will always carry the secret of their origins.